This project was submitted in February 2007 and was approved by the EVD for funding.

Unfortunately, the Dutch partner decided to pull out just before the contract negotiations with the EVD.

The Board of the Dutch company reconsidered their focus of investments in several countries of which China was one.

So although this project was approved it will unfortunately not be implemented.

500.000 euros of additional investment was planned by the Chinese partner in a CFC burning/cracking installation.

Abstract from the project proposal:

China’s gradual transition to a market economy during the last two decades has put China among the world’s fastest growing economies. While economic growth has increased incomes and improved health indicators, as well as reduced overall poverty levels, growth has not been totally benign. Environmental pollution is damaging human health, air and water quality, agriculture and ultimately economy. After 20 years of uncontrolled economic development, officials and citizens alike are finding it hard to ignore the chronic environmental damage. The government of China signed the Kyoto protocol in 1998, and although not bound by its emissions restraints, the Chinese government announced extensive protective environmental measures and has developed new legislation on collection, recycling and disposal of electrical and electronic waste (WEEE). China has shaped its China WEEE and RoHS [1](Restriction of the use of certain Hazardous Substances in electrical and electronic equipment) after their EU counterparts. However, China’s attempts to regulate the industry and establish a financially viable and safe WEEE management system are facing significant challenges. The existence of an extensive informal sector, combined with a lack of environmental awareness among WEEE collectors, recyclers and consumers, are contributing to China’s difficulties in developing a financially and environmentally sound recycling and disposal system.[2] The importance has been widely recognised but progress is slow. Without any alternatives for informal recycling processes it is very difficult to establish a regulated e-waste management framework[3].

One of many environmental problems is the disposal of waste in general and e-waste in particular. China has emerged as both major manufacturer and as consumer of electronic and electrical products. Last year (2006), manufacturers sold (on the Chinese market) more than 80 million mobile phones, 40 million TV sets, 43 million air conditioners, 19 million refrigerators and 16 million computers. China now has about 150 million refrigerators, 190 million washing machines, 400 million televisions and 26 million computers. Focussing on refrigerators; the production of refrigerators and freezers in China increases annually by 16%. There are more than 20 brands and 30 production lines in domestic refrigerator trade. Most house hold appliances came into use in the mid-1980’s and overrun operating life (10-15 years). Only 1/10 of the total house hold appliances were recycled by legal recycling corporations. All these products have become a mountain of junk in the last few years and are at its peak. Also, what is adding to the mountain are illegal imports from mainly the USA, Korea and Japan. Statistical predictions show that the number of end-of-life e-waste will keep increasing rapidly until the year 2015, at least[4]. E.g. 5 million computers, 5 million televisions and 4 million refrigerators will become obsolete this year only.

In addition to the fact that the amount which is recycled is very minimal, recycling is mainly done by manual dismantling. Small and back-yard workshops use methods such as acid baths to retrieve gold, open burning and unprotected removal of hazardous components. E-waste is stripped of valuable components and residues and large amounts of materials are dumped in landfills, fields, rivers and irrigation ditches. There are hardly any provisions to store or treat the hazardous materials which are compounds of all these products. These are highly toxic and especially harmful to human health and environment if not dismantled or disposed of carefully. Most electronic waste is shredded without proper disassembly, and hazardous substances are dispersed into the recovered metals and shredded waste. Furthermore, toxic substances (in the form of gasses) escape into the environment, are burnt as alternative fuel or leak into the ground after disposal by landfilling. Last but not least, the work in many (illegal) recycling workshops is carried out by poorly paid migrant workers and sometimes children, who work under inferior conditions and face severe health problems.

CFC’s and the Pilot Project

Following agreements amongst other counties laid down in the Protocol Protection of the Ozone Layer[5], China government has promised to stop using CFC materials in the production of refrigerators by 2007, but this does not solve the current problem of millions of tonnes of discarded refrigerators. Currently CFC’s are still released into the atmosphere. CFC’s in refrigerators are found in compressors and in insulation foam. In order to recover, store and neutralize CFC’s, specialized equipment and procedures need to be followed. Furthermore, the compressors also contain oil which is not collected and mostly seeps into the ground. Proper recovery is also needed here.

This Pilot Project will concentrate on recycling of refrigerators. RPCR will set up a professional recycling plant which will properly dismantle refrigerators, recover CFC’s and treat, store and neutralize other harmful substances released in the process. RPCR will set up a collection system in cooperation with local governments. As refrigerators (along with all other e- waste) are mainly collected door-to-door by individuals without business licenses or a fixed collection place, and consumers expect to be paid by the collectors for their discarded appliances, it is crucial to involve local governments. It is very important that they support this initiative by issuing and enforcing local legislation regarding disposal of this waste. The local Environmental Protection Bureau of Tanshan will require examination of this project for approval (Yutian County falls under the Tanshan area). The Yutian Investment Promotion Bureau has reacted positively to this initiative and would welcome and support this project as it is fits in their policy of environmental protection. A letter of support is added in Annex 8.

RPCR will start, on the smallest scale possible, with the dismantling and recycling of 195.000 refrigerators during the Pilot Phase. -(Note that this will keep 70 tonnes CFC’s from escaping into the atmosphere and 50 tonnes of oil seeping into the ground)- Turnover will be € 950.521 for the Pilot phase. The Project will be able to recycle 30% more material on refrigerators, which pushes the percentage of re-usable materials up to 90%. RPCR will set up a collection system with support of local governments in order to achieve a national network in Hebei province for the coming years. RPCR will grow to 468.000-500.000 refrigerators by year 5. 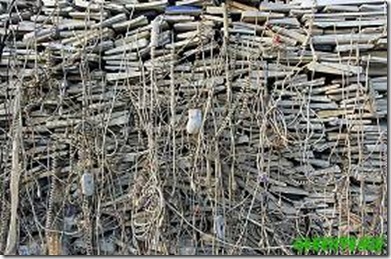 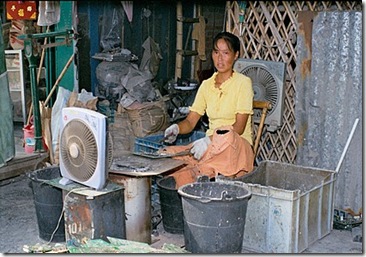 -Chinese woman smelts computer circuit boards over an open stove to extract metals. The fan is an attempt to disperse the highly toxic fumes created by the smelting. "Copyright Stichting Greenpeace Council"-

[2] “The recycling and disposal of electrical and electronic waste in China-legislative and market responses.” C. Hicks, R.Dietman, M.Eugster.

[5] Vienna Convention for the Protection of the Ozone Layer, 1999 Montreal Protocol.